The Boston Celtics lost a hard fought series against the Cleveland Cavaliers and then their season was over. Without leading scorer Kyrie Irving and big free agent signing Gordon Hayward, the team went on a surprising playoff run that put them right on the cusp of the NBA Finals. Contributions from veterans Al Horford and Marcus Morris, along with youngsters Jaylen Brown and Terry Rozier helped the Celtics validate their second place position in the post season without their big guns. The player that softened the blow of losing a guy like Irving the most was rookie Jayson Tatum. 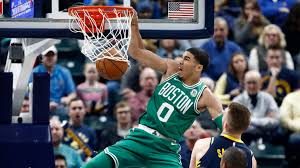 During the playoffs Tatum led the Celtics in scoring, averaging 18.5 points per game and shooting 47% from the field. He showed a real knack for creating shots off the dribble and made teams pay when they tried to switch up defenders. His defense was solid as well showing quick hands, breaking up passes and collecting steals. He was able to score in one on one situations while staying within the flow of the teams game plan.

His game seven performance against the Cavs proved he’s ready for the spotlight. The Celtics looked for and counted on Tatum to create offense during their terrible shooting performance. He scored 24 points and grabbed seven rebounds, often going right up against Lebron James. James had to settle for his fade away jumper a number of times as he was unable to pass Tatum off the dribble in many instances. The rookie let it be known that he wasn’t scared either, taking to the sky in the fourth quarter and putting the king on the business end of a wicked dunk.

Tatum exhibits everything you need to be an elite scorer in the NBA. He can score from a anywhere on the court! The rookie can hit shots as far out as the three point line and score around the basket with a nice touch. He can get to the spot where he feels comfortable and creates separation with his handle. He’s a classic mismatch at 6′ 8″, too tall for the quicker wing players and too quick for the taller players to defend him. He’s even mastered the art of getting to the free throw line when his shot isn’t falling.

He’s already an opposing coaches nightmare at age 20 and now he’s had a real taste of what it takes to win in the playoffs. His scoring numbers for next year should be up around 20 points per game regardless of who he’s playing with. He could also be Boston’s best player going forward after this season. Yes, Irving should be back next year and healthy. However, you better believe Tatum will get his fair share of shots.

It won’t matter who’s on the court next to him as the Celtics will look towards Tatum for buckets from now on. Whether he becomes the man in year two or he becomes Irving’s main assist target the message is clear. The rest of the league can now see that this young man is problem.