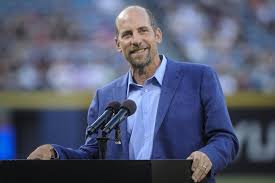 Follow me
Eric Urbanowicz
Writer at The 3 Point Conversion
Connecticut

Follow me
Latest posts by Eric Urbanowicz (see all)

A year ago Hall of Fame Pitcher, John Smoltz proposed an idea on television for how to “fix baseball’s playoffs.” His idea was each division would have two champions, a pre All-Star break champion and a post All-Star break champion. If a team wins both halves they would get a bye in the playoffs. The wild card seeding would remain the same, except instead of one game it would be a three-game series. Meaning you could have a minimum of four teams on each side and a maximum of eight teams. It was also explored to add an another team to each league to keep them balanced at 16 teams each. In addition, it would be made so if the maximum amount is reached that half the teams would get in at most, but not more than half.

Baseball ran this idea in 1981, due to a strike that happened mid season that was settled in time to have a first half champion and second half champion. There were two east champions and two west champions. East one would play East two, and West one playing against West two in the division series with the winners facing off in the league championship series.

That said, would this idea work today? Yes and no.

It could work because it would ultimately keep teams from tanking. With each half essentially being it’s own season, it would keep teams competitive no matter how bad their record may be. Say the New York Mets had a lousy first half, going 30-51, they would still have a chance after the All Star break to make the playoffs since it would be starting a whole new campaign. Likewise, if a team does well enough in the first half to punch a ticket into the playoffs early, then they’ll have motivation to fight as hard to win the division again for the series off. Some teams are historically better second half clubs while others flame out after the first half. It would be the perfect way to really combat the two.

While those would help it work, there’s some cons to it. The biggest one is there are 15 teams in each league, five per division. If you had to add another team, then one division would have six teams in each league. Another problem would be that doing this would throw off how teams sell postseason tickets. When a team makes the playoffs, the minute they know that they’ve made it or are close to making it, the team sells postseason tickets. If you do this then the team could face a harder time with refunds if they come close to making it both halves, only to fail.

It’s not a perfect system but the idea presents several interesting ideas and concepts. Though baseball may have one of the easier playoff systems, it’s interesting nonetheless. Change isn’t always a bad thing and while it could complicate everything, it could present an interesting alternative to the system fans know today.

Tune into The 3 Point Conversion Radio on:

© Copyright 2016, All Rights Reserved. | Powered by The 3 Point Conversion | Designed by The Ross Design Group
Scroll To Top